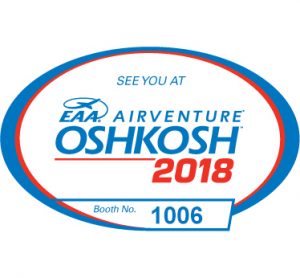 Representatives for Nicrocraft™ Exhaust Systems by Wall Colmonoy Aerobraze OKC will be on-hand at Booth 1006 to discuss your exhaust system needs for most single and twin engine aircraft.

Nicrocraft™ Aircraft Exhaust Systems are both newly manufactured and overhauled with FAA – PMA / STC approved parts. Nicrocraft™ Systems can be found in Cessna, Beechcraft, Mooney, Piper and other aircraft.

Visit the Nicrocraft standalone website for an online catalog of Nicrocraft™ Aircraft parts & components, or to learn more.

We look forward to talking with you and discussing your exhaust system needs!

More than 10,000 aircraft and half a million flight enthusiasts make Wittman Regional Airport the busiest airfield in the world during the EAA's annual AirVenture Oshkosh. This weeklong event draws visitors from more than 80 countries, many of whom fly in. In addition to daily air shows, the event also includes learning centers for children and aircraft enthusiasts; aircraft of nearly every size, shape and era; evening programs, like a "fly-in" theater, concerts, and presentations; and flight experiences.